Welcome to my travel overview page! Here you can find out where I’ve been, which countries I’ve written about, and what major routes I’ve hitchhiked and paddled since 2013.  All with nice maps!

Use the table of contents to find what you’re looking for. Please be aware that it’s an enormous job to keep this page up-to-date. If you have any questions, drop a comment all the way at the bottom!

My Articles Projected onto a Map

Zoom and drag across the map to see if I’ve written about a specific location. You can click a map location pin to read the corresponding article. I placed some articles in the middle of the ocean or in the middle of China because they’re not location-based articles but more generic info.

I’ve visited 74 countries including a bunch of really small ones. If you click a country, it will take you to a page with all the articles relating to that country. Countries I’ve hitchhiked in are in green and countries I’ve traveled to without hitchhiking are in light green! Don’t panic, if you hover over a country it will turn into this strange color.

Many hitchhikers keep some statistics on their waiting times, distances and average speed, and the like. I don’t really do that. Keeping track of the routes is easy enough, but the waiting times? Isn’t that potentially horribly depressing? Anyway, you do you!

I used to carry around a little book that I to take note of my rides. I wrote down the date (if I was aware), from where to where, what the driver’s name was, and the topics we chatted about. It has no use in a spreadsheet. Today, I use my phone to take notes and the slightly creepy features of Google do the rest of the work to track my trips.

Here I made a few interactive maps of a few trips and added a few other details. If it was my first time in a country they are written in italics. Since making these maps and calculating stuff is quite a lot of work, this list is not complete at all and misses a lot of the trips I’ve done in the past. I do my best, though, to be thorough.

Use the table of contents to quickly travel to the continent or trip you’re looking for. Some maps are more advanced than others. If you see this symbol, you can find additional information by hovering over it with your mouse or tapping and holding it on your phone.

Kilometers hitched: 2762 kilometers until Penang. That includes a 12-kilometer hitch from Tanjung Piai to Kukup.

Use of Public Transportation: As I’m getting older, I’m not going to stubbornly hitchhike every single kilometer anymore on this trip. Between Mandalay and Nyaung-U I took a cruise and between Yangon and Mawlamyine a train. Between major cities, I sometimes flew. Inside cities, I’ve used: metros, taxis (mostly via an app), tuk-tuks, rented scooters, rented motorbikes, rented electric scooters. I often used tuk-tuks to get to toll booths to hitchhike from. Since the pandemic, we’re not allowed to hitchhike anymore in our host country Malaysia. That’s understandable.

Between May and September 2019, we paddled halfway down the Danube River. Nope, it’s not hitchhiking, but it’s a different kind of awesome. If you want to learn more about taking our laptops in an inflatable kayak, visit the Danube overview page with interactive maps and even a nice excel sheet.

After hitchhiking in South America for more than two years, I had to return to Europe to finish my studies and get rid of my student debt. Jonas came with me and we lived an ordinary life in an ordinary apartment.

Between 12 December 2017 and 3 January 2019, I was basically stuck in Maastricht, the Netherlands. That’s the town where I started my bachelor’s degree back in 2010. In November 2013, I dropped out of university and did all these other trips on this page in-between.

As a student, I sometimes had one week of vacation to travel. With such little time, I had to use airplanes. Those trips took me to Tunisia, Sardinia (Italy), and Mallorca (Spain). I sometimes I hitchhiked in the Netherlands from Maastricht to Utrecht to see my family. During the 8-week summer holidays, I did do some hitchhiking journeys in Portugal (solo), and in Poland, Belarus, Lithuania, and Latvia with my partner Jonas. While awaiting the news if I’d graduated or not, we traveled to Cabo Verde.

Google My Maps has a limit on how many places you can add on one map, so there are three maps to show the entire trip in South America. Some stats:

Number of rides: An estimated 281 rides

Now here are the three maps with their separate data:

Date: 20 April 2017 – 12 December 2017. This is a continuation of the Southern Cone + the End of the World and Atlantic Crossing by Boat: Hitchhiking South America maps below. The break-off point is in Lima, Perú.

Use of Public Transportation: The boat from Pucallpa to Iquitos was not hitchable and neither were the four boats from Iquitos to El Coca in Ecuador. I took a short taxi ride from Zumbahua to Quilotoa in Ecuador as well, which was a splurge. The boat to Tayrona National Park wasn’t hitchable and the whole trip was a rather expensive ordeal. To get to Punta Gallinas – the northernmost point of South America – is not really possible without arranged (and paid) transportation.

Date: 18 November 2015 – 20 April 2017. Google My Maps has a limit on how many places you can add. This map is a continuation of the Atlantic Crossing by Boat: Hitchhiking South America map below. The break-off point is in La Junta in Chile and continues until Lima, Perú.

Kilometers hitched: 14967 Kilometers (9300 Miles) from La Junta in Chile, till Lima, Perú. Scroll up to see the continuation of this trip and scroll down to see the beginnings!

Use of Public Transportation: The ferry to cross over the Lago General Carrera/Lago Buenos Aires at the Chile Chico border crossing costs 2.100 Chilean Pesos (~€2,60). The ferry €20 from Buenos Aires to Colonia del Sacramento in Uruguay.

Date: 18 November 2015 – March 27th when I arrived in La Junta. The following map belongs together with the two above it!

Kilometers hitched: 10801 Kilometers (6711 Miles) by hitchhiking and approximately 7000 by boats across the Atlantic Ocean and the Gulf of Corcovado.

Use of Public Transportation: I had to take a flight from Amsterdam to the Canary Islands (BOOO! I know…) and the cruise ship I took to cross the Atlantic Ocean was a really cheap “repositioning cruise” – both were sponsored. On the mainland of South America I’ve taken a few city buses to get out of the cities; namely the Saõ Paolo metropolitan area in Brazil and to get out of Asunción, capital of Paraguay. In many places, it was possible to walk out of town, though.

Kilometers hitched: 11790 Kilometers (7326 Miles) by hitchhiking and walking (I had to walk a lot in Spain) and 630 Kilometers (392 Miles) by sailboat from Corfu to Malta, that’s 340 Nautical Miles. This was supposed to be the trip where I visit all the countries in Europe I haven’t been to yet, but then I changed my mind (it happens).

Languages needed: Spanish and English. Occasional German, French or Russian when hitching with other tourists. Super basic Portuguese, but many folks spoke English/Spanish/Portuñol.

Use of Public Transportation: None, except for the ferries from Malta to Sicily and Sicily to mainland Italy. That last one costs about €2.50 to cross a small strait (I couldn’t be arsed to find a boat hitch for that). Emergency flight from Lisbon to Berlin. This was one of those trips where I changed my mind at some point and drastically changed my plans.

Kilometers hitched: 19946 Kilometers (12.394 Miles) hitched over roads. Many parts were done using the speed hitchhiking method (get on the highway, don’t leave it until you’re at your destination) which is why I was able to cover such a distance in half a year while also visiting places. I covered the distance Maastricht – Tbilisi in five days. The distance Istanbul – Maastricht was covered in 60 hours.

Use of Public Transportation: None, unless paid by a host/driver/friend. Oh, and the ferry between Mersin and Cyprus isn’t hitchable, so I paid.

Kilometers hitched: 8816 Kilometers (5478 Miles) From Mexico City to Panama City and a little in the Dominican Republic.

Languages needed: Spanish and English. Occasional German, French or Russian when hitching with other tourists.

Use of Public Transportation: None, except for the flight to the Dominican Republic. The ferry from Punta Gorda, Belize, to Livingston, Guatemala isn’t hitchable, so I paid (but sailed it myself!), but I got a free bottle of Jack Daniel’s.

Number of rides: I have no clue. I wasn’t tracking my rides as meticulously. I did hitchhike with three consecutive Chrisses in a row in Wales.
Countries: The Netherlands, Belgium, France, England, Scotland, Shetland Islands (part of Scotland), Isle of Man, Wales.

Use of Public Transportation: I went by train (one of those douchy Virgin trains with champagne for the wealthy commuters) from Liverpool to Lancaster once and took the London Tube to get through and out of London. I paid for the ferry to and from the Shetland Islands (there was a blizzard) and to and from the Isle of Man, but I managed to hitchhike the Eurotunnel and the ferry back to Calais with drivers for free.

Date: During the summer holiday of 2013 (about 6 weeks from July till early September).

Number of rides: I have no idea.

Languages needed: English, Dutch, German. Russian would have been great to know but eh, I couldn’t back then.

Use of Public Transportation: I wasn’t really adamant back then on hitchhiking everything, so I mixed things up with the bus and train. The first leg of the trip all the way to Czechia was a road trip with some friends and split the gas costs. In Romania, I didn’t hitchhike at all because someone told me they always wanted money. Two years later I had a great time hitchhiking around Romania, so that was a lie. I had a lot to learn still back then.

If you add up the numbers on this page, I hitchhiked 86137 kilometers in total. But I hitchhiked a bit more than that in other places that I haven’t made a map of yet. I’ll add those maps and update the numbers when I find the time! 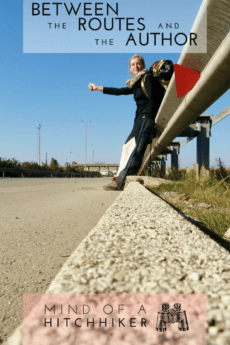