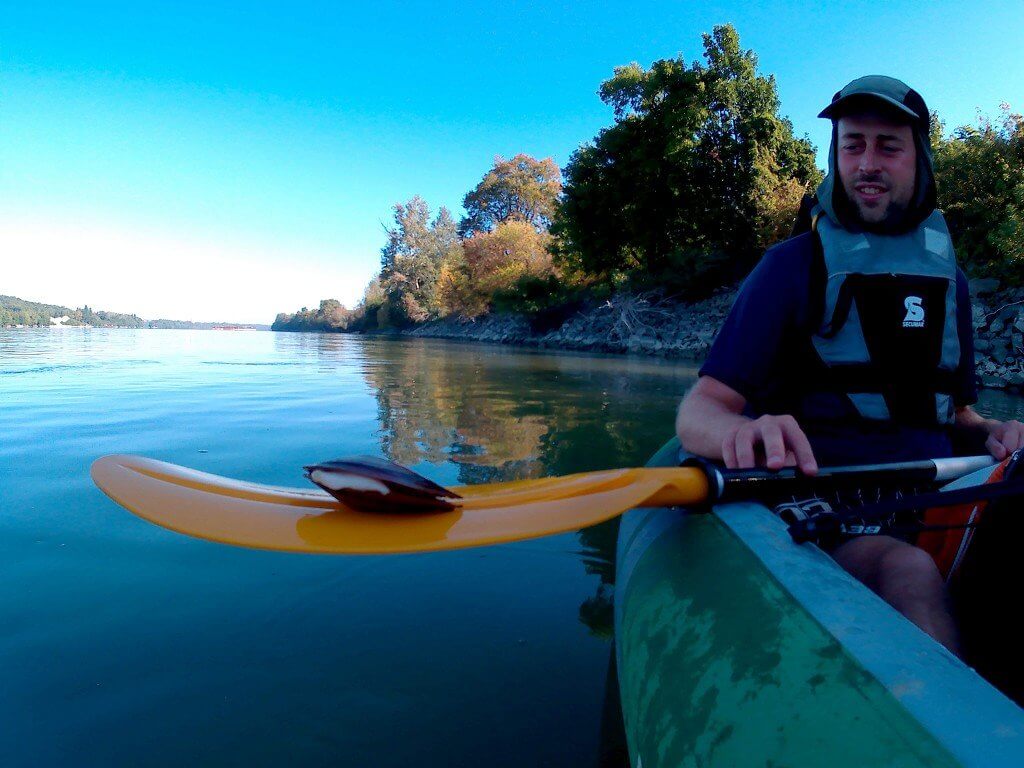 Events detailed in this article happened on Thursday the 5th of September, 2019. We paddled from Dunaújváros to Harta in Hungary. We paddled 32.4 kilometers down the Danube in our dutiful inflatable kayak.

Our Stay in Dunaújváros

The weather turned more autumny during our three-night stop in Dunaújváros. Our Airbnb was extremely pleasant, so I didn’t really mind being holed up in there with internet, plenty of food, and Jonas.

To say that Dunaújváros has gone through an identity crisis is an understatement. Dunaújváros used to be the site of the Roman town Intercisa in the province of Pannonia. After that, it was known as Pentele or Dunapentele. In communist times, the government chose this site to host the largest iron and steel industrial zone in Hungary. They named it – predictably so – Sztálinváros or ‘Stalin City’. They built the city basically from scratch to 60.000 inhabitants in the 1980s. That’s why it’s a model city for socialist architecture/urban planning and ‘Stalin’s Baroque‘. Very exciting stuff for me!

Some people tried to rename it back to Dunapentele, but the compromise name eventually became Dunaújváros (Duna = Danube, új = new, város = city). Though I did find a few good buildings in ‘New City on the Danube’, I felt it was more about the entire urban layout than the individual buildings. We also didn’t explore as much of the city as I’d wanted in those post-work afternoons.

As for our arrival, we also needed a taxi for our departure. Via our host, we managed to order one to our door, though the streets were already full of taxis at 8:00 in the morning. We drove down the hill and the forest road back to the kayak club, which looked pretty closed for the time of the day. We used the floating dock to inflate Zucchini and pack everything in the boat. At 8:40 we were paddling towards Harta. 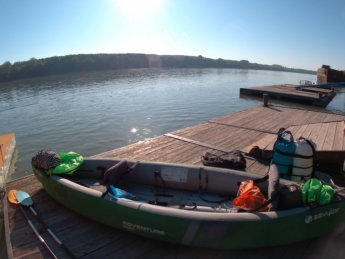 We directly crossed over to the left bank. Something floats in the water and Jonas decides to pick it up with his paddle. It’s some kind of huge mussel, presumably dead. There are many of these dead mollusks floating around us and landing on the beach. I wonder if this species traveled upstream from the Danube delta at the Black Sea and then couldn’t travel further than Esztergom. 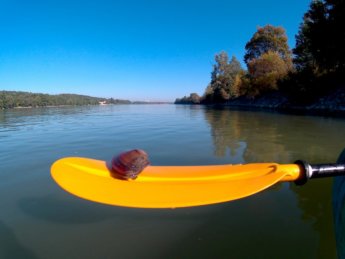 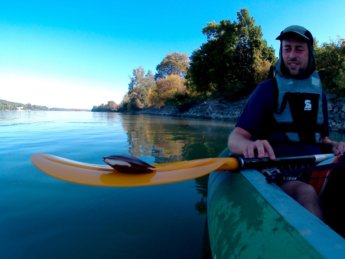 There were already some canoeists on the river. We soon see the big Pentele highway bridge across the Danube downstream. It was a cool 19°C. When looking back upstream, we already see the moored barges of Dunaújváros diminishing in size. 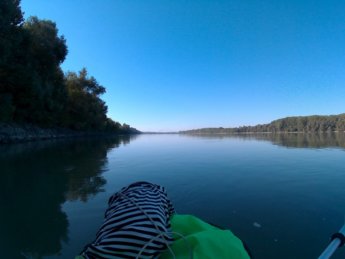 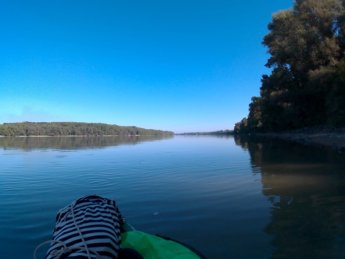 At 9:15, we take our first break already, before we even passed the Pentele bridge. Even though it’s still almost 140 kilometers to Mohács, we can already count the number of Danube-crossing bridges left in Hungary on one hand. It’s still weird that this trip is coming to a (temporary) end soon. We continue paddling 15 minutes later.

A German-style cargo ship travels downstream while floating quite high. Probably the only reason why it’s traveling on the river with the persistent low water levels is that it’s empty. That cargo ship passes by a pusher boat a bit further downstream. The pusher boat was frantically moving around a bunch of barges one by one closer to the center of the river. Somewhere here, the number of barges a pusher boat can push also increased from two-wide or two-long, to two-wide and two-long. 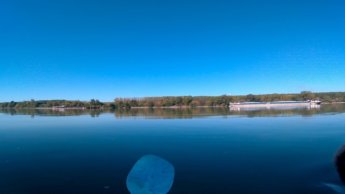 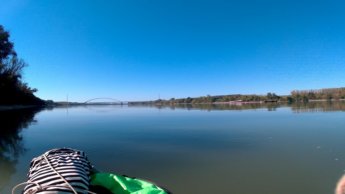 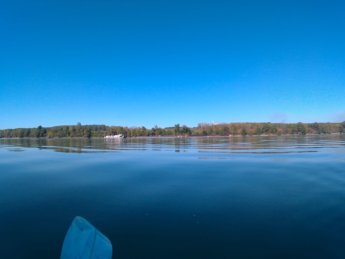 We pass under the bridge. In its shadow, I feel quite cold. On the right-hand shore appears a little marina with a cute restaurant. I’m somehow quite hungry already and would be up for making a stop for some hot coffee. But it’s too early in the day for an extended stop and we just had a break. 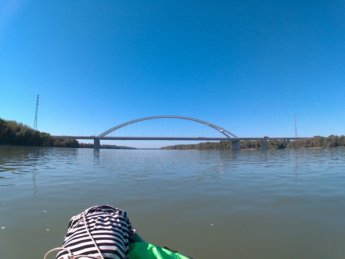 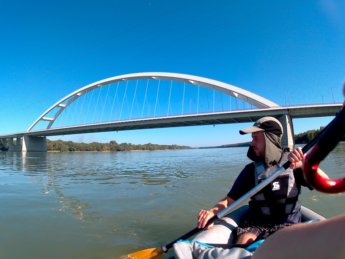 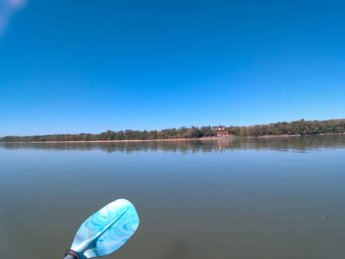 Not much later, we actually have a second break after paddling just 7.5 kilometers since the last stop. We seem to be moving quite slowly today. The temperature has risen a bit but so did the headwind. It smells really good outside, which makes me wonder whether I’ll have a hard time adjusting to the more sedentary and indoor life that will come soon as the temperatures drop. It doesn’t matter which city: rehabilitating from all the fresh air I’ve binged on will be tough. Thinking I’ll soon travel to the most populous city on earth makes me gasp internally. 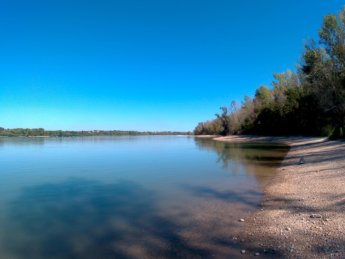 It’s 11:00 by the time we’re paddling comfortably again. Near the bifurcation of the Danube and the Solt Danube, we see some men on the beach with a tiny dog that barks at us the whole time we’re in view. To our right is some kind of oil or gas industrial terrain where the empty German cargo ship lands. Perhaps it gets refueled here. 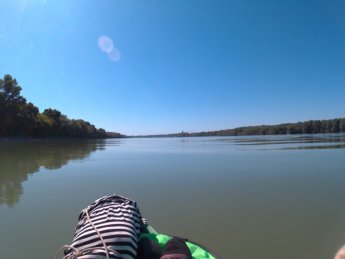 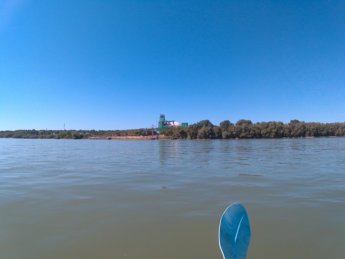 We’re entering Dunaföldvár, which looks like a cute town with plenty of accommodation. I ask Jonas again why we’re not staying here instead of Harta. Harta wasn’t our first choice for an overnight stop because it’s not really halfway between Dunaújváros and the next big city: Paks. Apparently, we couldn’t find anything available in Dunaföldvár. 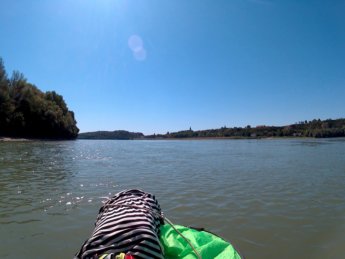 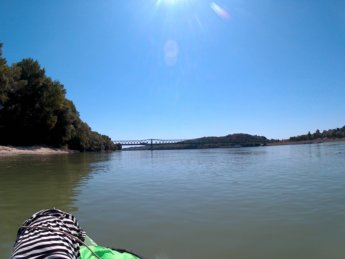 Dunaföldvár has again one of those beautiful steel bridges across the Danube. In an attempt to be like the cool young kids, I publish some Instagram Stories with great troubles from the boat. We see a misplaced red buoy on the left side of the shore, which is where the green buoys are supposed to be. Who do you call for a misplaced buoy? 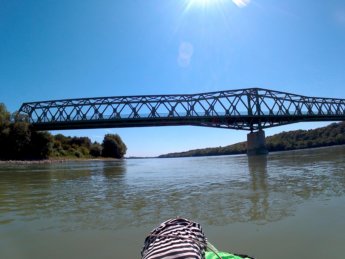 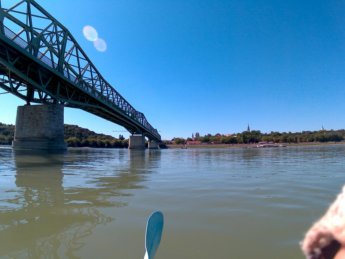 The Solt Danube rejoins us in an unspectacular way, as it seems to have dried up. There’s some kind of dredging machine in the confluence. There’s a very nice beach here and some attempt to start a summer business. But the leaves are clearly turning color now and only the most persistent of humans (the fishermen) are left on the Danube’s shores. 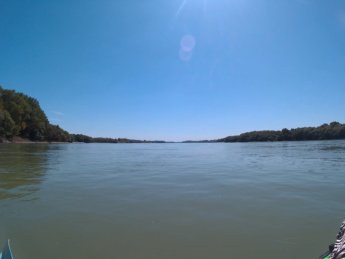 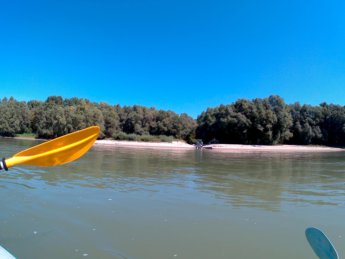 The Last Break Before Harta

The shipping lane goes more to the center of the river and we follow that path. The current increases a bit which makes things quite enjoyable. At 12:40 we need to temporarily exit the shipping lane in anticipation of a cargo ship traveling upstream. It’s really taking wide turns and seems to be struggling with something. We cross over basically to the right-hand shore as the cargo ship makes a wide curve close to the other shore. 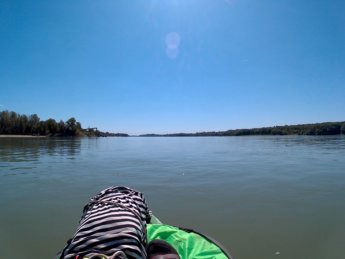 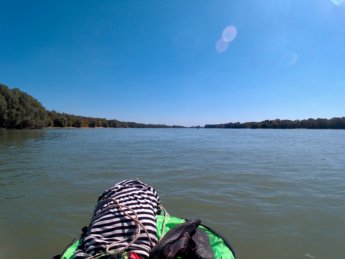 I see a Dutch flag on the stern and squint to read the name. Volharding, or ‘perseverance’. Considering this is only the third cargo ship we’ve seen today on the shallowing river, the name appears aptly chosen.

We take one final break on the left-hand shore after the ship passed us. It’s 13:15 and we make it a short one because we’re really not far from Harta anymore. By now it’s 26°C and if we stay out much longer, we’ll need to reapply sunscreen one last time.

The river curves right. We try to shortcut a bit through the shipping lane by taking a straighter line, but this almost never works out in practice. To our left are some silos and some conveyor belt construction to put the mountains of sand in the background onto the ships. 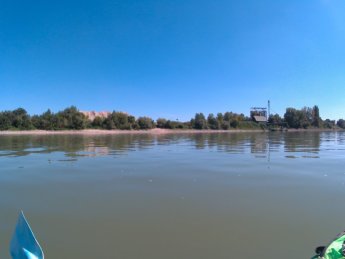 Somewhere around here should still be the Danube Bike Path, which started all the way in Germany. But we’ve barely seen any cyclists beyond Budapest. To be honest, I hadn’t noticed their absence before.

With the help of our GPS, we identify a concrete slipway as our exit spot. We land there at a little past 14:00. It’s quite steep to get out and we’re surrounded by fishermen with large cars. Together we carry Zucchini and all our bags to a spot up the hill with grass and shadow. As the earth spins, our shadow doesn’t last very long before we’re back in the sunshine. Zucchini dries well and we pack up all our stuff to make the 1-kilometer hike to our guesthouse (vendégház). 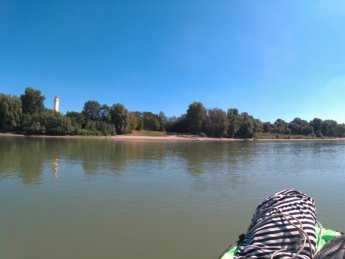 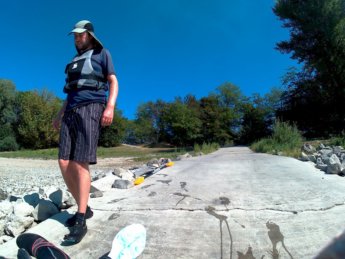 It’s tough, but we make it in one go. Harta is at the busy route 51, which leads south from Budapest. Crossing such a road is a bit scary. On the other side, we see the sign to Tamara Vendégház, which we found on Booking. A lady shows us to our room, which is actually a small apartment with a fully-functional kitchen and a large bathroom. We both take a shower and then go out to get some supplies in town before heading out for dinner.

Our stay in Harta was only one night before paddling to Paks. 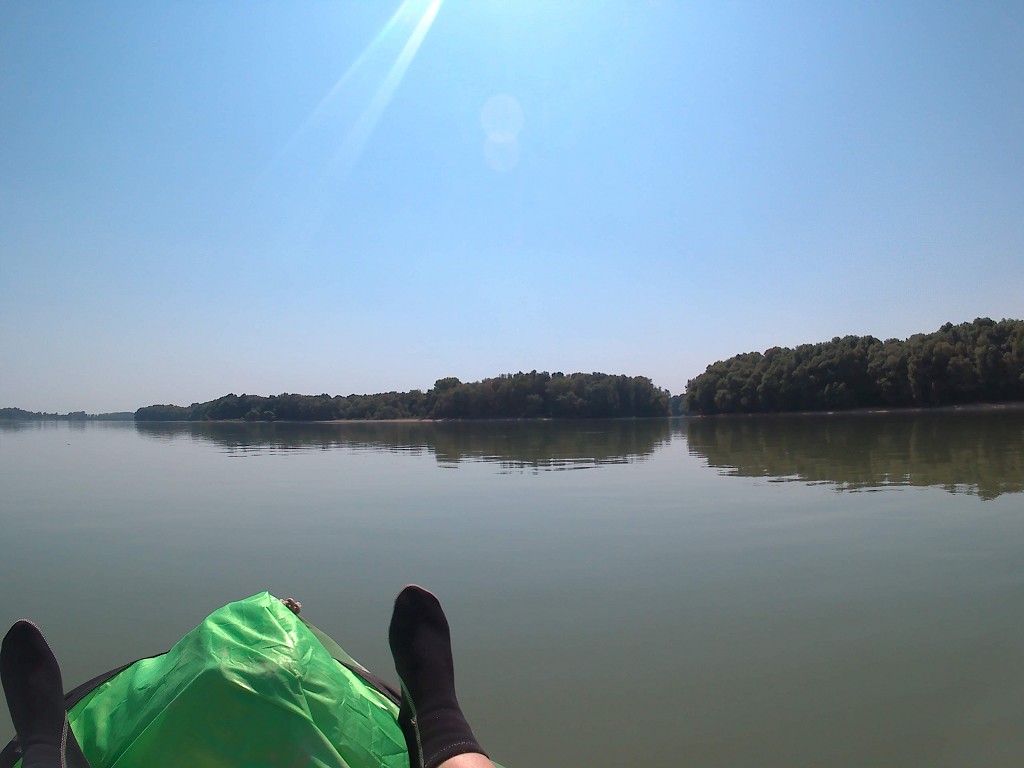 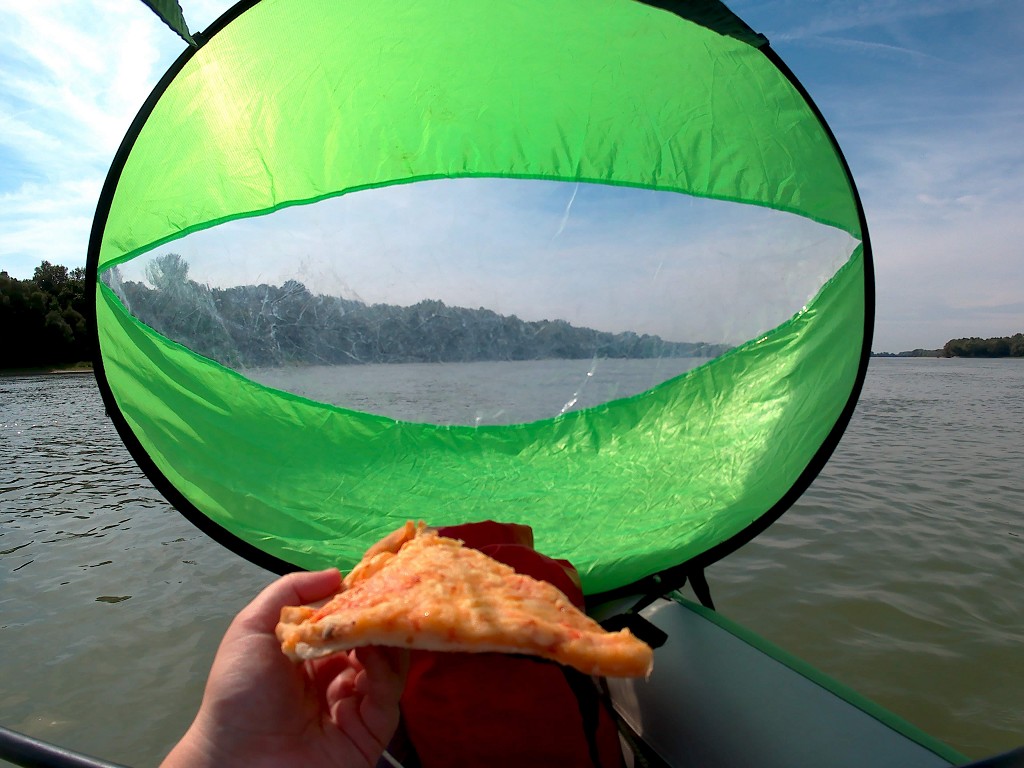 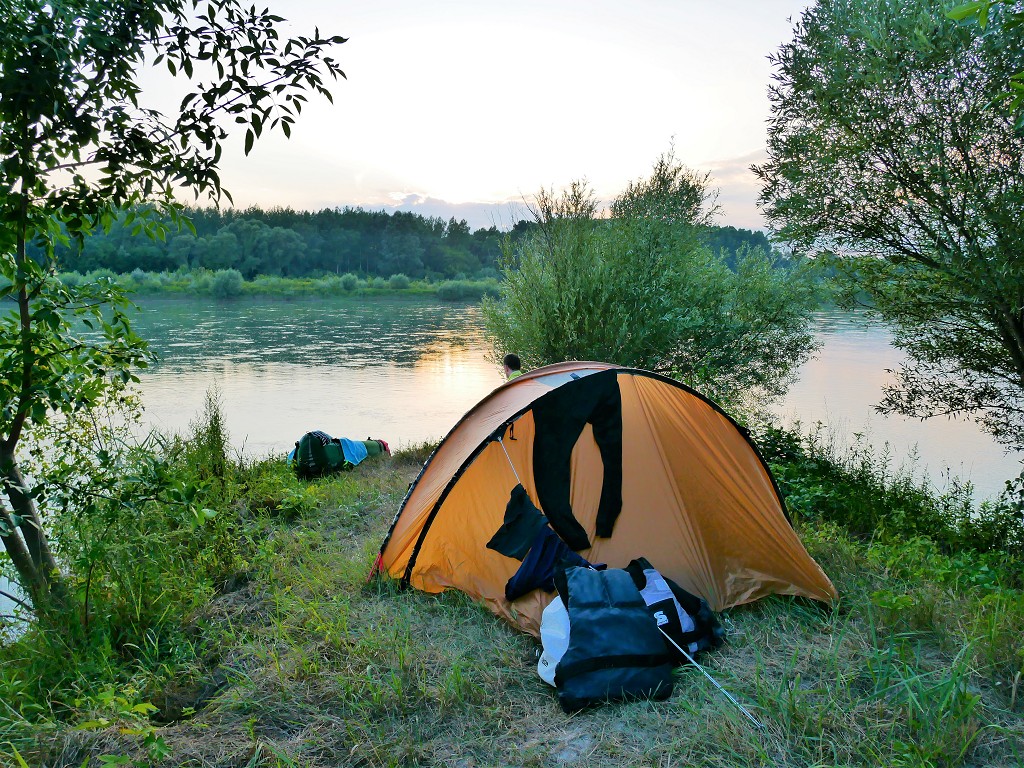 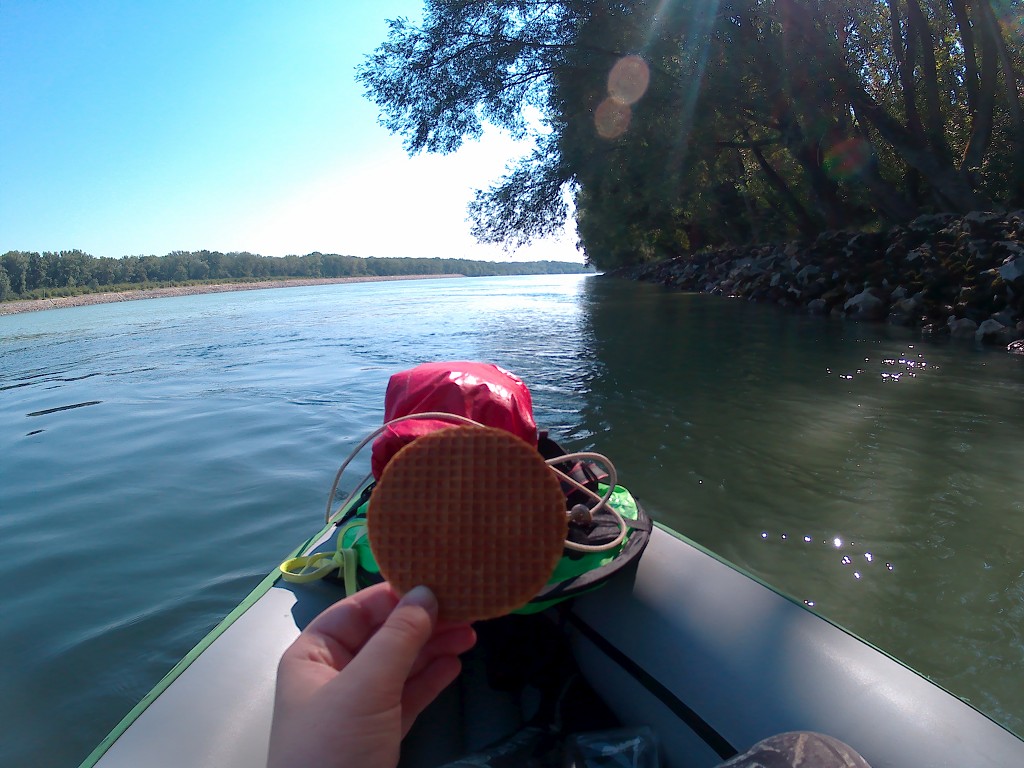