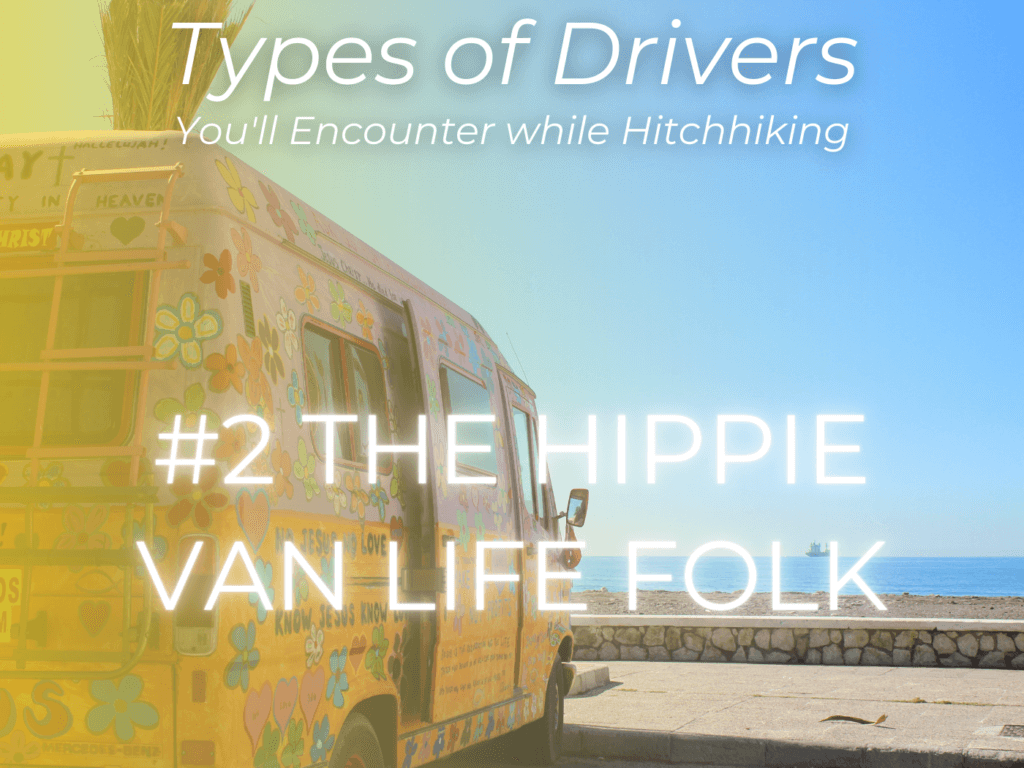 The hippie van has become a rarity on the roads of Europe, but on certain trails outside of the EU, these guys are omnipresent like nothing ever changed. There’s a small but noticeable difference between van life and #vanlife. They are some of my favorite people to hitchhike with.

Many Levels of Van Life People

Sure, they carry a MacBook Pro with them and their views might not be as idealistic anymore, nonetheless, there are still – mostly, but not necessarily – young people hitting the road in preferably a VW minivan. I dig the term ‘Scoobydoo van’. Their van might have graffiti on the outside and a strong stench of marihuana on the inside.

Yes, the true Hippie Van screams “I’ve got drugs! Drugs people! Come check it out!” So when hitchhiking with these people in a country where weed is illegal and there is always a big manhunt out on drugs (like Mexico), you can expect a couple of police checks at the very least, but since weed is for sharing, you can get *stoned while rolling to your destination for free. Just make sure that when the police stop you and a situation happens, you explain you’re a hitchhiker and you didn’t know anything. Don’t. Get. Involved.

*[Warning: it might even be considered rude or at the very least lame if you don’t smoke along. In that case, you can pretend-smoke just to keep the peace.]

In terms of driving this group (there’s always a minimum of two people in the Hippie van) is undoubtedly the most chaotic to hitch with. They want to do their best for you to bring you to your destination or the next best service station, they might try to convince you to tag along to their destination because there’s a PsychTrance festival going on somewhere. The simple fact is, though, that you will never arrive because:

A) they drive a shit old car and it breaks down every 50KM. Of course, they have the tools to fix everything, but do they know how to use them?
B) they get lost. A lot. It’s one big drama of going on the highway, taking the wrong exit, discussing the situation, getting back on the highway, and press repeat at some random moment.
C) their memory might be impaired. You have to tell them 20KM before your service station that there is where you want to be let out. Do it again at 10, 5, and 2 kilometers to make sure they got the message. Point at it. Talk about the fucking sandwich you’re going to have there. Use the word “dude” a lot not to seem like a dick.

Chances are they will take a wrong turn before anyway and leave you with the consequences of having to hitch back on the freeway.

Why Hitchhike the Hippie Van?

So why would you still get in with the Hippie Van driver? Because you probably have a lot in common.
Because they share everything with you, from the legal to the illegal.
And because you can talk, but you don’t have to. Just relax, maybe nap a little, and enjoy the trip in this Magic Bus.

Why did they pick you up?

They have to. They’re Hippies and they support things that became popular in Hippie times, like hitchhiking and free love and all. They will pick up as many hitchhikers as possible because they can’t say no. It’s proving your Hippie-ness and Karma and the Shanti, good vibrations, and Ohm whatnot. Peace and love bro.

Which car do they drive?

An old minivan. Could be a newer model too but the inside will look used for all kinds of purposes, like making love. Rarely it’s just a car, but you will be able to identify the Hippie-ness once the window rolls down and you use your nose. Dreadlocks are also a dead giveaway. Sometimes there’s graffiti on the car. FYI there’s a direct positive correlation between the amount and brightness of the graffiti and how many times the police will check the car.

From freeways to dirt tracks. The Hippie Van should be cherished for its sudden appearance and its familiarity. Spontaneous disappearances also happen. Not only its inhabitants work like the peyote they may be on, it’s reflected to the outside and encompasses the entire van and the universes.

Festival season in Europe, year-round in the Americas, generally speaking in warm seasons and climates. They are usually hard to spot in the morning because they’re sleeping and they also don’t like to drive at night.

Quite terrible and inefficient, not counting the rare exceptions. Their car is old, the meter for velocity is broken, so are the side mirrors. It might be slow because of DUI. Not alcohol though. They are not the biggest fan of that. Unless Germans, but they drink at night and are generally very responsible drivers.

What language to speak?

Hippie vocabulary. Most of these people speak English in Europe. In Central America there are loads of Argentinians driving around for years in this way, so Spanish is obvious over there. Germans and Hungarians also form a large chunk of the generalization pie and their level of English may vary big time.

Anyway, talk about the universe, music festivals, drug experiences, travel, and their interpretation of what Buddhism is. Hate for the establishment will also give you points. Avoid the word “hipster” at all times.

Can you smoke in the car?

You can smoke ANYTHING you like dude! Just don’t ash the car too much. That’s bad Karma.

What are the gad 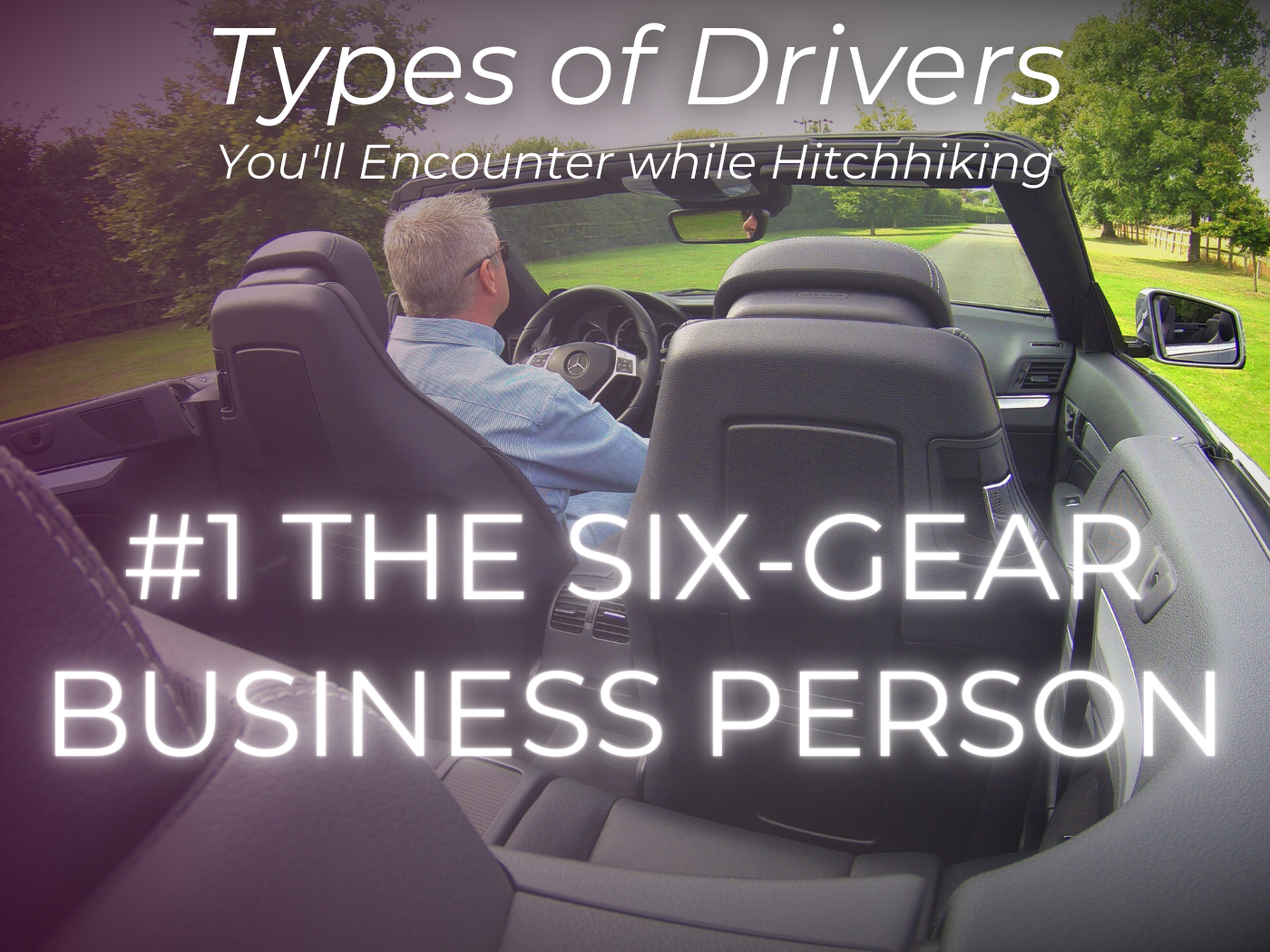