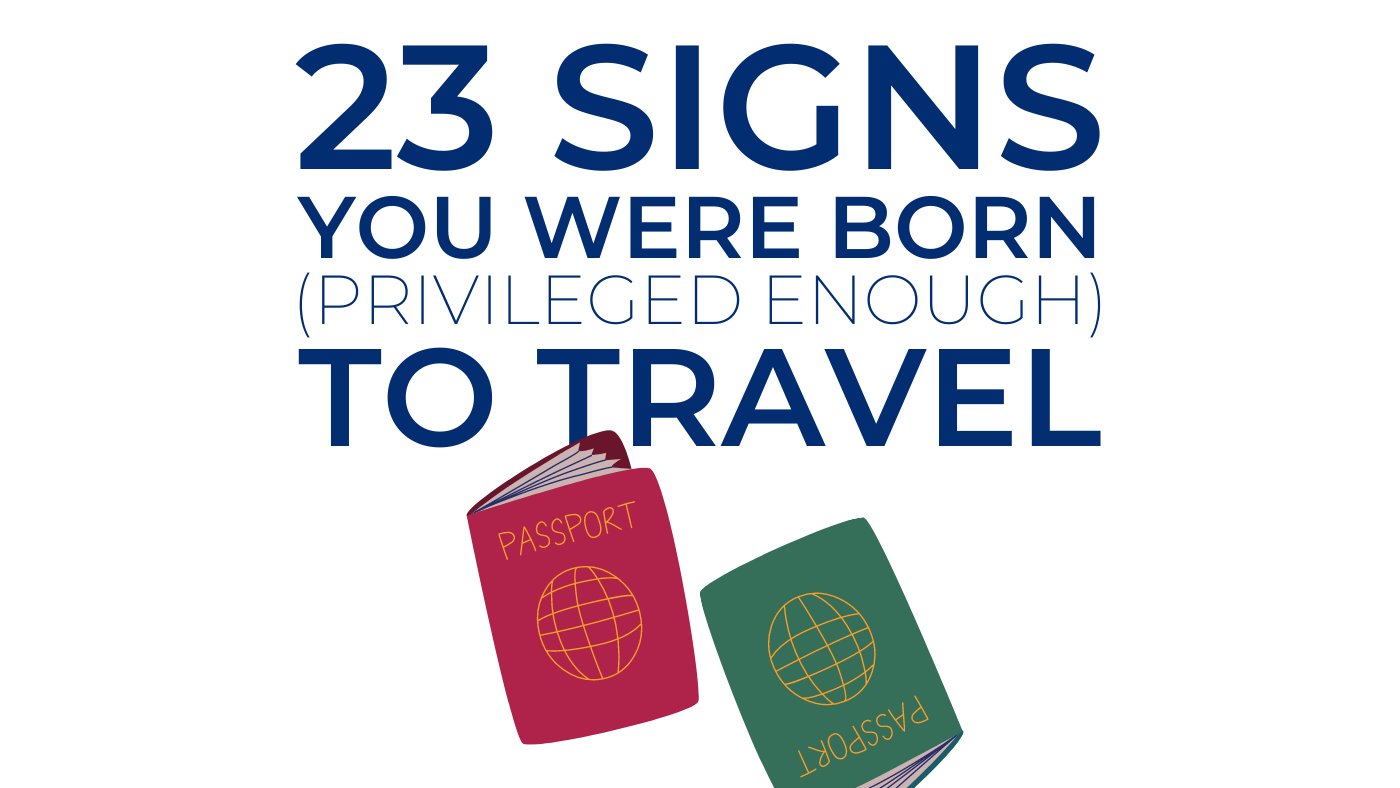 Ahh, ye good ole entitlement issues! Nobody’s born to do anything in particular. Have you looked at babies? Yea, I thought so. Here are some signs that you were born privileged enough to travel the world:

0. No man, company, institution, or government owns your freedom. Privileged!

1. You’re not a stateless person and own a passport. You can go to an institution of your own government to ask for and obtain your own passport to travel abroad. Moreover, there’s no need for you to first obtain permission from a male family member. Likewise, you can travel as a single individual without drawing suspicion about your moral character. Your government allows its citizens to travel internationally.

2. That passport is a useful passport of a nation-state with (good) diplomatic relations with the outside world. You can travel to some neighboring countries on that passport without needing a visa for everything.

3. There’s no need with your passport to cross borders illegally by swimming through rivers, climbing 6m high fences, or digging tunnels. In other ways, you can enter just by queuing.

4. You can cross an official border without including hours of interrogation for travel time. Because when people see you, they don’t make stupid assumptions about your appearance about your religion, sexual orientation, class, marital status, political affiliation, etc. whatnot.

5. Immigration officers don’t “randomly” pick you out of the line at any border crossing 10 out of 10 times. Receiving a pat-down or extra luggage check because of vague reasons at immigration still catches you off-guard.

7. Your need and desire to travel doesn’t come forth out of political/religious/ethnic/sexual persecution by your own country or people inside your own country. You’re not traveling because someone threatened you.

8. Your travel style doesn’t include being a “sardine in a can” taking boats made for 50 passengers, but in reality taking 300 souls across, without any safety vests on board, and with a sinking rate of “unbelievable”.

Also read this piece, whether you’re privileged or not: How Many People Can Visit All Countries on Earth?

9. You’re not being extorted by people who give you the idea of a better life on the ‘other side’ of the journey. For instance, someone won’t charge you the price of everything you got to travel, without even guaranteeing you’ll arrive alive. Trust at its finest.

10. You’re not ruthlessly sent back to your own country upon arrival at your destination, because of vague reasons no one wants to get into.

11. You speak a language that other people tend to speak to get around the place you travel to so you can make yourself understood and keep you out of trouble.

14. The internet in your own country is without censoring, so you can look up information about other countries and places to maybe travel to. Also, it would be nice if you grew up in an area that had access to the internet or at least an atlas. A working toilet, running water and electricity would also be nice.

15. You grew up not too poor to travel, maybe even have done some international travel as a child and now as an adult, you have enough funds to do it yourself – or have enough creativity to make money on the road.

16. The country you travel to welcomes you as a “tourist”, “business person” or maybe even “expat” or “exchange student”, not a “refugee” and “asylum seeker” or even as a “criminal”.

Want to read more? Here’s another suggestion: Tourist vs Traveler Debate: Don’t be an Asshole

17. The laws and medical facilities in your own country don’t require you to travel to another country to receive the safe medical treatment you need and have a right to; you have authority over your own body and your body is not the property of your government, religion or culture. Moreover, your government doesn’t violate your sovereignty to travel for such reasons.

18. Generally, your own country is portrayed in all international media as peaceful and developed or there’s never any news about your country ever. No news is good news.

19. The stereotypes about your nationality and/or ethnicity and the connotations and assumptions with those are either positive or not particularly harmful.

20. You are employable pretty much anywhere around the globe with the nationality you have. Your passport is never the obstacle to advancing your career or following your dreams.

21. When you enter an establishment where people usually spend big money, people greet you positively based on your skin color because of assumptions that you’re rich and will tip well. People never assume from your skin color you’re going to rob the place or do other illegal shit. People don’t act weird around you because of your appearance.

22. You didn’t need to leave your country because of a natural disaster, highly infectious disease, or basic goods (such as condoms, medicine, food, and soap) shortage.

23. You can dream of travel as a leisurely activity, rather than a means to survive, to begin with.

∞. So many more things beyond what I’ve just mentioned here. No one should make a bold claim that they were “born to travel”, while some people on this planet are forced to travel or forced not to travel.

This listicle was written on 03/03/2015 in response to the Matador Network listicle on www.matadornetwork.com/life/23-signs-born-travel/
The linked articles and videos are just examples of how travel might be experienced by the less privileged of our planet.

ETA: and in response to other articles that claim there’s a “wanderlust gene” solidifying the idea that some people are born to travel (which sounds just a lot like entitlement): http://elitedaily.com/life/culture/wanderlust-gene-people-born-travel/953464/ claiming that “modern societies” tend to travel more than African ones… I just can’t even…   https://psychologyblogaimee.wordpress.com/2013/12/04/wanderlust-a-genetic-basis-to-a-globetrotting-fanatic/
Or this one! Everything is irrelevant!
http://news.bitofnews.com/the-wanderlust-gene-why-some-people-are-born-to-travel-all-over-the-world/