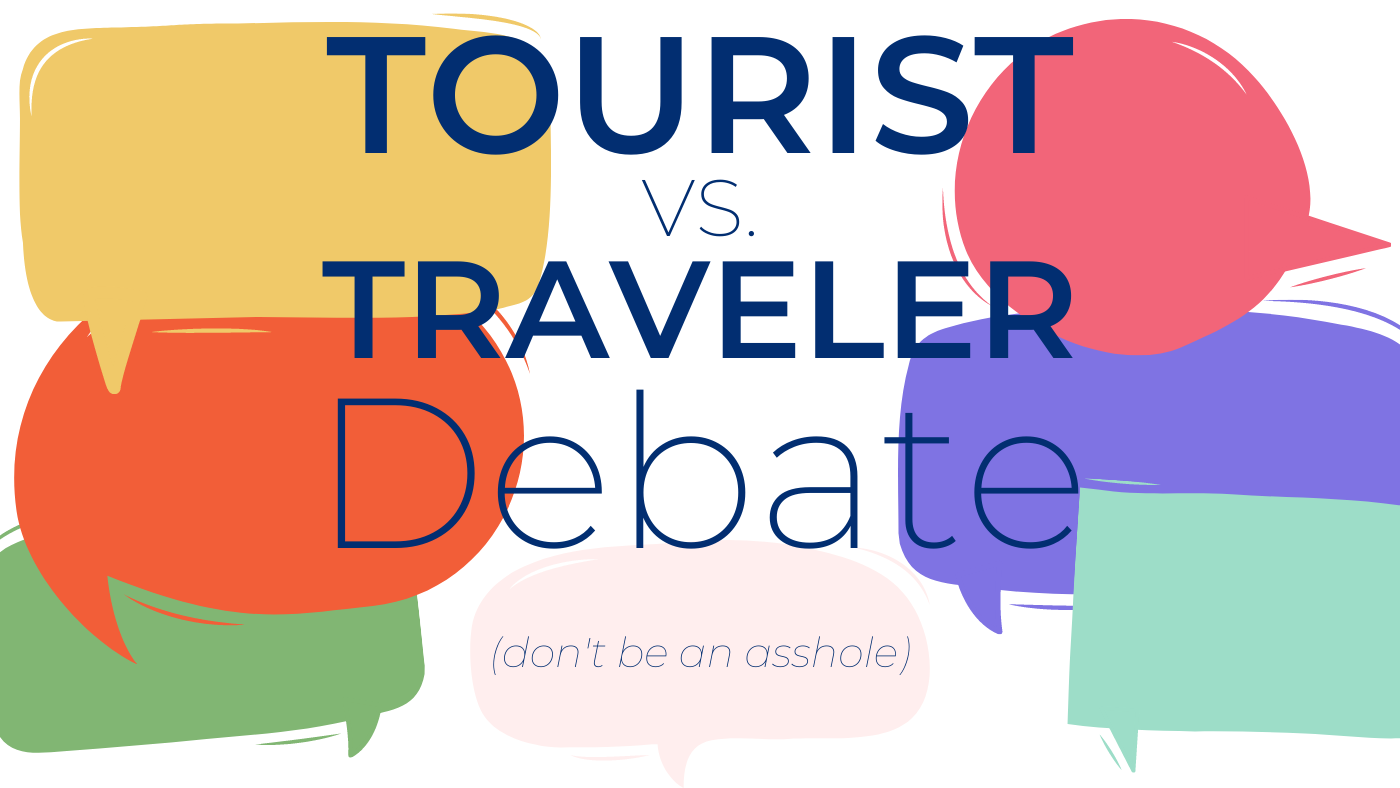 The tourist vs traveler debate is a real thing you’ll hear about often when on an extended trip. I think it’s a tiring, irrelevant debate that really bores me by now. So often you hear people self-importantly tell you at a hostel, hotel, or bar that they’re “not a tourist”. Is this a matter of feeling insecure? Apparently being a tourist is a bad thing, but why?

Most of us who travel start out as tourists. We book a tour that includes a flight, hotel, food, and trips to the most important sights such as the Pyramids in Egypt and the St Peter’s cathedral in Vatican City. Someone arranged everything for you. Giving this kind of power to so the local experts gives a sense of security we like. We’ll see everything the guidebook says is important to see. We’ll take pictures or selfies with said sights. There’s no need to learn a foreign language. The price includes a comfortable night’s sleep everywhere en route. These are the guarantees we’re given. And if we didn’t like it or something went not as planned, we either write a bad review, ask for our money back or sue them. It’s a set formula that works for most people.

Being a “traveler” is surrounded by more whimsical vagueness and indirect answers. You tell your strange conversation partner abroad that you “go with the flow”, “don’t care about money and guidebooks” and do “authentic travel” (whatever the hell “authentic” means really). The label “traveler” doesn’t imply anything specific though. It doesn’t say whether you travel with a backpack or a suitcase. It doesn’t tell you whether flights, buses or trains, hitchhiking or walking is involved. Couchsurfing, squatting, camping, hotels, or hostels aren’t mentioned by the “traveler”. Nobody will know whether you eat at top-notch restaurants or dumpster dive on the way, whether you try to speak the local language or use the Internet on the move.

The point: if you’re going to label yourself, do it right, be specific – and don’t be a twat about it. There’s nothing inherently wrong with booking a tour to Auschwitz in Poland or Stalin’s dacha in Abkhazia. The prime example of the confusion of these terms is the Democratic People’s Republic of North Korea: you can travel there and it’s an off the beaten path destination, but you can’t do it independently or on your sudden whims. Are people who take a tour to North Korea travelers or tourists? They’re both, and that’s why nobody should care about this anymore. Some sights or destinations demand a tour, so everybody who sees anything abroad is at certain times a tourist. Deal with it. Accept it. Cherish it.

Guidebooks aren’t wrong, but they’re just what the name is: a guide in the form of a book, not a commitment or something mandatory. Using a Lonely Planet or Rough Guide doesn’t mean you’ll follow every step the authors tell you. You’ll pick and choose and then you ignore the rest and maybe find something else on the way from other’s recommendations. If you judge a person on the fact that they have a guidebook with them, you’re the asshole, not them.

What do you fill in on the visa application form to the Islamic Republic of Iran? There’s a box for business visas, which you don’t tick off unless you’re doing business in Iran. There’s a box for tourism and believe me, you’re not going to scratch out the word “tourism” and write “traveling”, “soul searching” or “adventurously exploring the realms of Persia” there as your reason for visiting, you’re just going to tick the damn “tourism” box and hand it over without a fight or feelings of shame.

See the real-life interaction with another human being abroad the same way as a visa application. What are you? You are what you do. Indicate what you do without being vague in three phrases or less. No, you’re not a “g*psy”*(Which is a slur), ”nomad*“ or ”wanderer“.  You have a history of how you came to this place where you and your conversation partner met. They’re asking about that history. It’s nice to answer this question honestly without any pretension. Say you’re an interrailing backpacker who does CouchSurfing for two weeks in total. Say you’re a non-location bound internet entrepreneur, traveling since 2006. Or say you’re a bus aficionado with a suitcase who spends the night at pre-booked hostels. Tell people you’re a freecamping tax-evader who went to a non-extradition country to avoid imprisonment (ok, maybe saying this much is non-advisable).

Yours truly? Right now, I’m a freecamping or CouchSurfing hitchhiker and busker and I’ve been doing nonstop-autostop for 1,5 years. I book the occasional tour to do sightseeing and I try to not stay in hostels and I avoid airplanes at all costs. But this might change if my circumstances change by, for example, acquiring a disability at some point in my life.

[*OK, you can be Romani of course, or a nomad if your origins are from some nomadic tribe. But my problem with these terms is that they’re appropriated by (generally affluent white) people who saw some of the world at some point and start calling themselves g*psies or nomads. I think it’s not just a little offensive to simply give yourself a title like that while Romanis and nomadic peoples all around the world are persecuted and discriminated against for their way of living. I know it’s a way of symbolic speech, but I wonder what said peoples have to say to these people of privilege. I’m alright with the term “digital nomad” though, because “nomad” is merely symbolic here.]