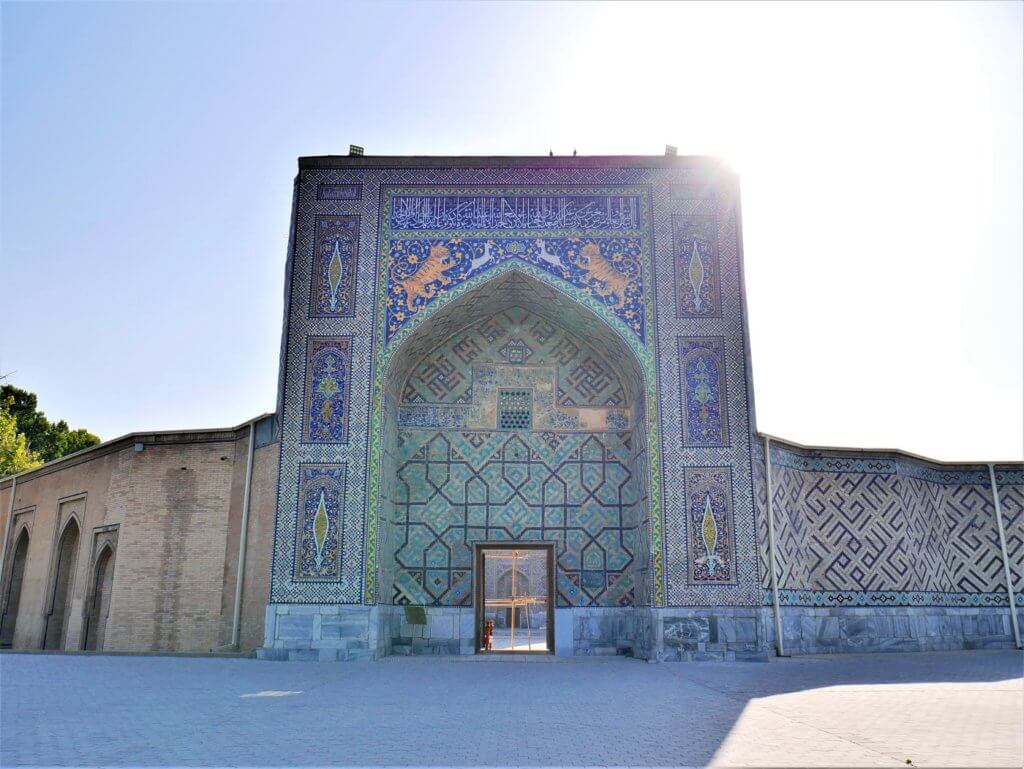 Besides the Nadir Divan-Begi Madrasah in Samarkand, there’s one that’s much more famous in Bukhara. I wrote this post to help people find this beautiful and underrated madrasah in Samarkand. Continue reading to find out how to go there and what the entry prices are or scroll down to “in short”.

Why is the Nadir Divan-Begi Madrasah in Samarkand So Hard to Find?

If you Google for the Nadir Divan-Begi Madrasah in English, you will only find the madrasah of the same name in Bukhara. It’s much more famous than the one in Samarkand, which is why the search results are flooded with the wrong one, even if you specify to Google that you’re looking for the one “in Samarkand”. The only reason I found out about the Nadir Divan-Begi Madrasah in Samarkand is that I found the name on a sheet of paper next to another Samarkand site. Consequently, I went down a rabbit hole and eventually found the Russian wiki for the one in Bukhara, which links to the Russian page of the one in Samarkand and Uzbek wikipedia pages for these two sites.

That’s very unfortunate for the people who have been renovating this 17th-century madrasah and expected to have visitors to admire its beauty and history. So I decided to write an article to hopefully let Google know that there’s another very pretty madrasah called Nadir Divan-Begi in Uzbekistan’s second-biggest city.

Edited to add: I got curious again if I could find it in the English search results if you try different spellings. The best I could find is this photo from the 19th century of the madrasah before renovation. Taken when Samarkand was part of the Russian Empire and the region was called ‘Turkestan’.

Taking a Taxi to the Nadir Divan-Begi Madrasah

On the 19th of July, 2021, we wanted to go to this madrasah. I first wanted to visit it in the morning or early afternoon, but during our visit to the Gur-e-Amir complex (Amir Temur’s mausoleum), I noticed that my micro SD card was full. So we returned back to our Airbnb nearby Samarkand’s Registan and regrouped.

In the afternoon, at around 16:30, we tried again. We walked to the Registan and even crossed the road to take a taxi in the right direction without the need for a u-turn. I showed the driver the Google Maps location of the mosque next door (written as ‘Khoja Akhrori Vali‘ on that app). I told him it’s in the “Ulugbeg Mahallah”, which is the name of the neighborhood (mahallah) named after the legendary astronomer Ulugh Beg. Lastly, I even told him the place is nearby “Ulugbek kino”, or the cinema of the same name. If I had asked him for the Nadir Divan-Begi Madrasah, we would have surely ended up 261 kilometers away in Bukhara.

Eventually, he said yes to driving us there and we hopped in. Not even two minutes later, he took a wrong turn in the direction of the Ulugh Beg observatory. So I said “Это не так, стоп пожалуйста” and we discussed it for another minute when he admitted he had no idea where we wanted to go. So we got out of the car.

Across the street into the right driving direction, we stopped another taxi and I asked the driver if he’s okay with me just saying “прямо, направо, налево” and he was okay with that. So I hopped into the passenger’s seat and Jonas got into the back. After not even a minute of describing where we’re going, he asks me where it is we want to go. I say “Khoja Akhrori Vali i Madrasah Nadir Divan-Begi” and he’s immediately like “Я знаю”. Fantastic! He tells me he also doesn’t need phone navigation.

The ride itself continues to be more like a hitch than a taxi ride. I ask him if he’s born in Samarkand and he says yes. He says he’s ethnically Tajik and begins to talk about the famous philosophers and poets from Samarkand, some of whom are Tajik. I don’t know shit about poetry or poets and my face just blanks. He laughs that I don’t know these people or these poets. I tell him it’s my first time in Uzbekistan and Samarkand.

We arrive at the Nadir Divan-Begi Madrasah and it looks great. We thank him for the ride and pay him the UZS 20.000 that’s a common fare for medium distances in Samarkand for two people

We walk to the big entrance of the madrasah with the tigers-chasing-some-kind-of-goat mosaics above the vault. We can already see that there are some renovations going on inside. Three men are chilling in the entrance on one of those Uzbek benches with a carpet. One guy looks ready to talk and we ask him the entry price. UZS 20.000 as expected. We pay the fee and for research, I also ask the opening times. Till 17:00. Shit, it’s already past 17:00 though? But this seems to not be an objection. 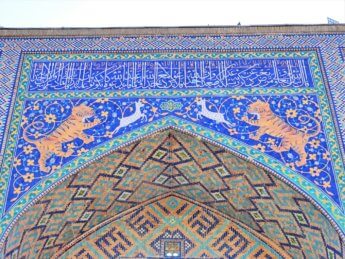 The guy tells us the madrasah dates back to the 17th century and then invites us to wander around in the courtyard, which has plenty of carpet beaters. With an eye on those supposed opening times, we first go to the main mosque building. It’s very pretty though bare from the inside after the renovation, save for the mihrab. Then we enter some of the smaller rooms when the same guy shows up again. He decides to spontaneously give us a little tour of the place and help us imagine what it was like for students back in the olden days. 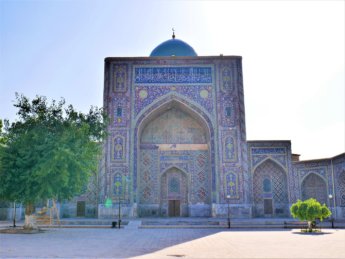 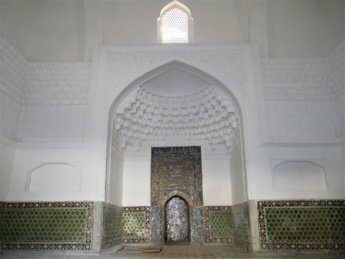 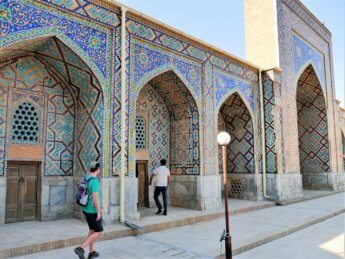 The tiny rooms are dormitories, where students from the whole region came to study Islam and the Quran. Four students used to sleep and study in one room. The big building was used for teaching, eating, praying, assemblies, etcetera. Perhaps in the future, the people who manage the madrasah want to organize tours where they mimic the life of madrasah students from back then. That should be interesting. 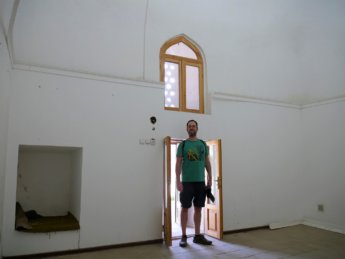 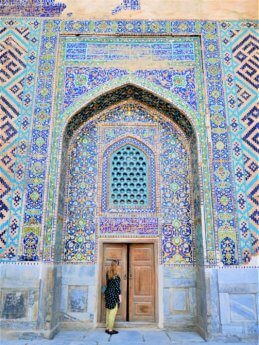 Upon our way out, we asked when they expect to finish the renovation. I understood “the eighth month”, which would be August 2021 – really soon – or perhaps the eighth month of the Islamic calendar, in which case I have no clue. Jonas understood that the renovation would be finished at the end of the year. (So if you’re visiting, perhaps drop your experience in the comments and let other readers know if the renovation has been completed!) 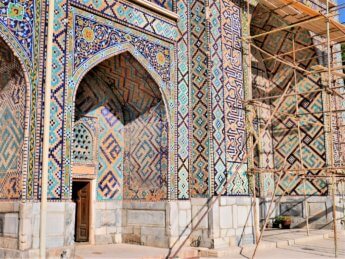 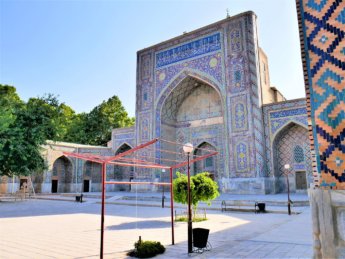 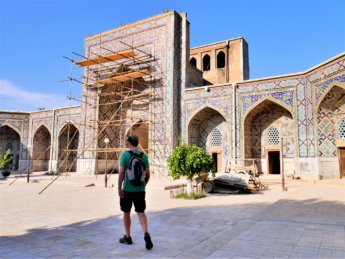 The Xoja Ahror Complex Next Door

We walked out of the madrasah and decided to try to reach the ‘Xoja Ahror complex’ by first walking around the backside of the building. Though we saw the dome from the back, walking around wasn’t completely possible, so some people told us to go through the gate where there’s a plaza with a fountain next to the open-air mosque and a cemetery with the tomb of Xoja Ahror (aka Ubaydullah Shashi). 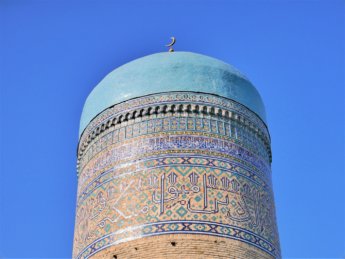 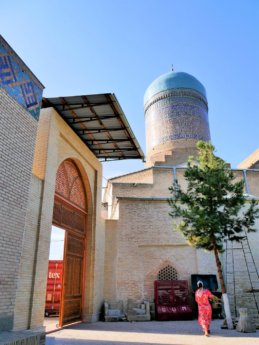 The open-air mosque looks really cool and has beautiful painted wooden decorations on the pillars and the ceiling. The minaret is detached from the rest of the complex. 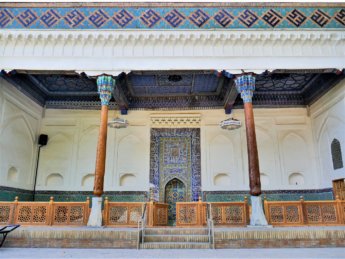 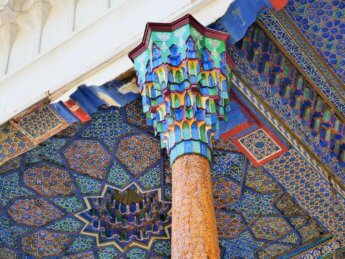 We walked around the cemetery to read some names and went to the pond to cool down beside some dated trees. This is the real reason why Uzbekistan has so many public fountains everywhere; the area immediately next to the water has a completely different climate. The number of people on the mosque grounds was slowly growing as the shadows grew longer. 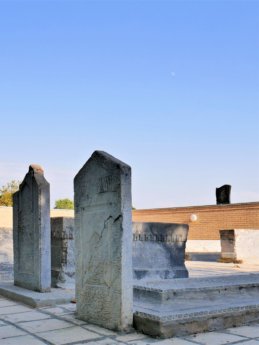 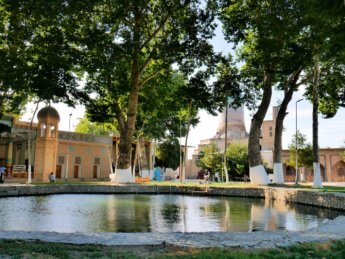 On our way out, the adhan began. More and more men came to the mosque at a less relaxed pace than before. Some people came by bicycle with their prayer mat casually hanging over their shoulders like a sports towel. One guy came to a standstill from his jog to tell us that this is the call to prayer. “We are here to praise God… Allah,” he said, raising his eyebrows to emphasize. He asks us for our names, and we say Jonas – which becomes Yunus – and Tamara. His name is Ahmed. But Ahmed needs to go right now so he says goodbye and dashes off again. 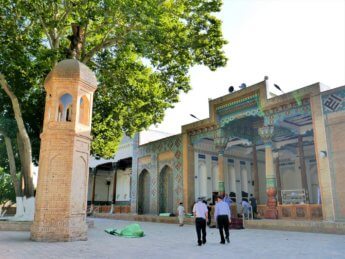 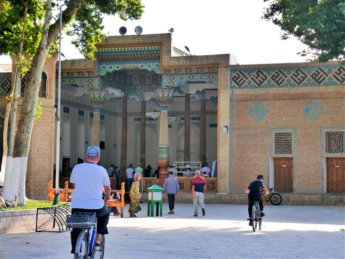 As difficult it was to get here, taking a taxi back to the Registan is always a piece of cake.

This site goes by many names, so show your taxi driver the following:

On Google Maps, someone named it the Khoja Akhrori Vali (this link sends you to Google Maps).

The main guy said that they will finish renovations still in 2021. I heard “the eighth” as in the eighth month, August. Jonas heard “the end” as in somewhere toward the end of 2021. Let me know in the comments from your visit if the renovations have finished; in my experience in Uzbekistan there’s always more work to be done on the madrasahs, mosques, and mausoleums.

This site is a little confusing! There’s a Nadir Divan-Begi Madrasah in Bukhara that is very famous. The Russian Wikipedia revealed that there’s a madrasah of the same name in Samarkand. Eventually, I found some wiki pages talking about it in Russian and Uzbek. It seems to be next door to the Xoja Ahror Complex, which is far more Googlable. Anyway, because it’s so hard to find in the English language, it seems like many western tourists haven’t made it here yet. Perhaps it’s a true gem? 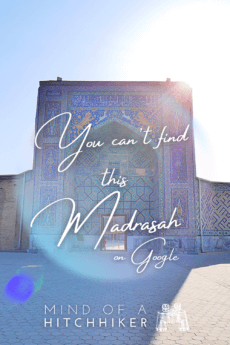 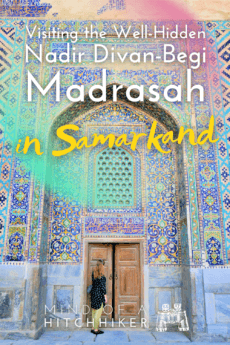 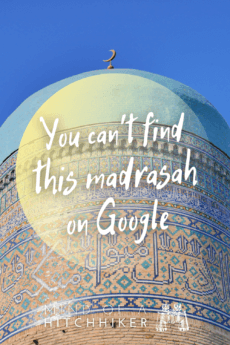 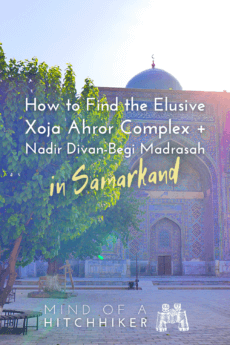 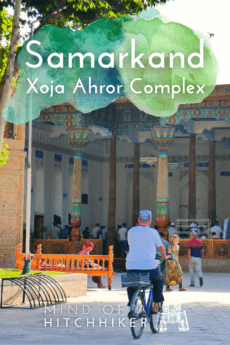 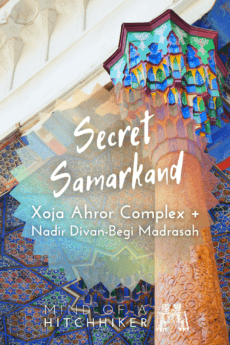 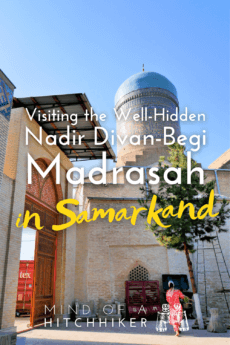